This dynamic monologue is a tour-de-force for a sixtyish male actor. The actor-character, living out his own Pirandellian melodrama, tells the audience about the problem that keeps him from sleeping. In doing so, he works in lines from Shakespeare, Calderon, and various other European and Spanish dramatists. He also recalls conversations with other characters.

First staged in Spain at a May 2003 theatre festival, the play starred Juan Luis Galiardo and was directed by José Luis García Sánchez.

The author, José Luis Alonso de Santos, is a major figure in Spanish theatre. He is the former director of the Royal School of Dramatic Arts and a director of classic theatre, as well as a prestigious playwright. A previous metatheatrical monologue, featuring lines from Zorrilla’s classic Don Juan play, was written for actor Rafael Alvarez, “El Brujo”. That highly successful text, La sombra del Tenorio, has been revived multiple times.

The English translation is as yet unpublished and unstaged. 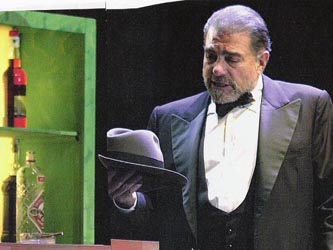